Our pets feel as much a family member as any of the bonds we’ve been lucky enough to see in this series, so for Aneisha Soobroyen and Jack Walker – partners in wedlock and Co-Founders of natural pet food business Scrumbles – their business is a family affair in more ways than one…

Parents to Smudge and Boo, the husband and wife team join us on the podcast to share tips on how to balance a relationship with responsibilities within the business, their status as one of the first pet companies in the UK to certify as a B Corp, and the incredible tale of how they turned down an offer on Dragons’ Den in a single look… 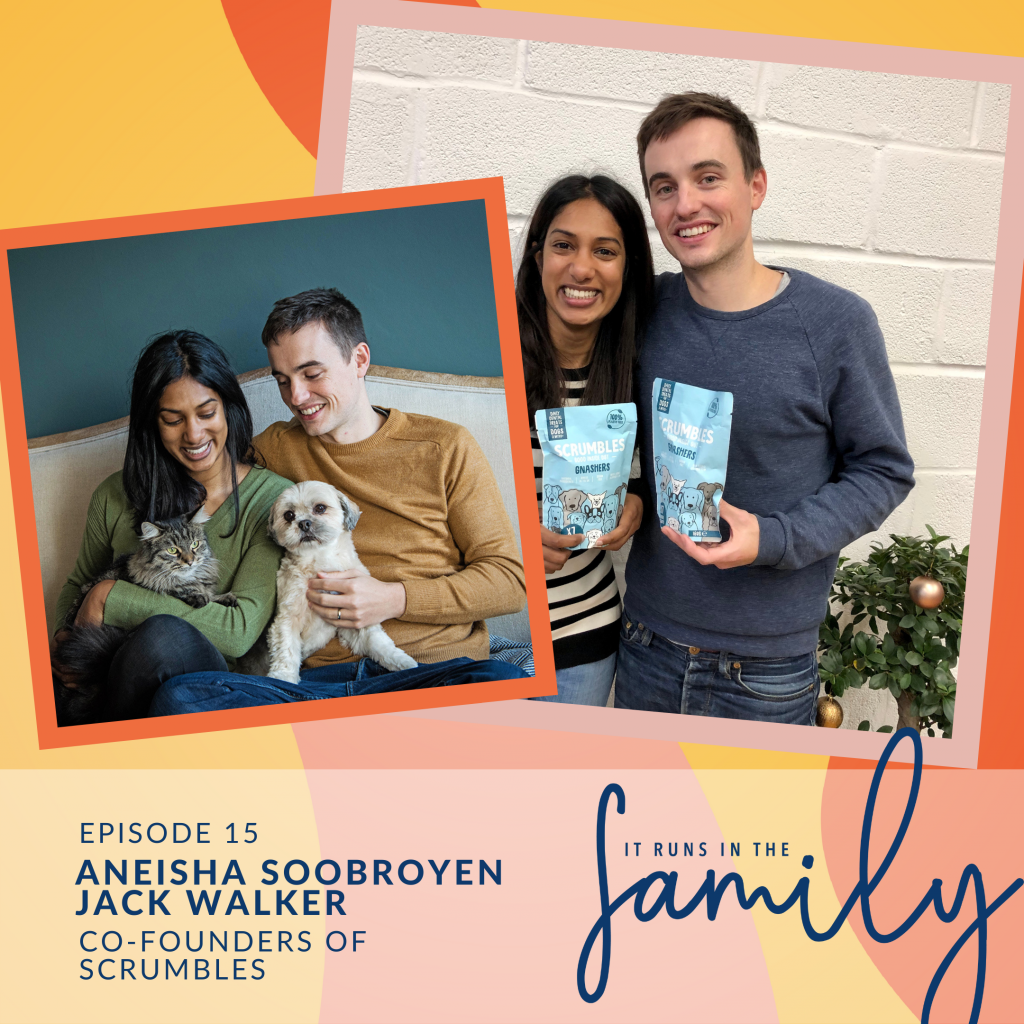 “We were definitely gonna get stuck into something together, but we weren’t sure what it would be. At one point, there was an idea for a pet shop that came around a few times. But it was when Boo was poorly and we had that real acute problem, and had to find a solution. That was the real step change of: ‘This is it. This is what we’ve been looking for. Let’s take the leap now.’” – 4:05 – Jack Walker

“In terms of roles and responsibilities, there are some things that are very fixed, and then there’s some things where the lines are blurring.” – 8:10 – Jack Walker

“I really enjoyed the Dragons’ Den experience. You don’t get to see a lot of the interactions with the dragons but they’re all really interesting people with a lot to say. I’ve got a soft spot for Touker – they always edit him to look horrible, but he’s so charismatic and sweet. And we really enjoyed the experience, we got a lot of exposure too. ” – 13:55 – Aneisha Soobroyen

“There are lots of long sleepless nights and heart panics in the middle of it. But we just kept going at it. We kept getting rejected a lot by people with some real brutal feedback from some people. But we just kept pursuing it and pestering people. Then you found people that were looking for exactly what we were offering, and they followed us on that journey.” – 17:20 – Aneisha Soobroyen

“Being husband and wife, and working the hours we do, it’s difficult to separate work from personal life. I’m bad because boss Jack’s switched off, and I then keep bringing him back in at 11pm as he’s drifting off to sleep!” – 24:30 – Aneisha Soobroyen

“Once you’ve gone into business, you can’t really go out of it. So see that you can attack smaller projects first. Jack and I did a house up together, and that was quite difficult. It was all new to us and we saw how we dealt with pressure and stress and different things like that first.” – 29:05 – Aneisha Soobroyen

“I think we do a good job now environmentally, and that’s part of how we’ve certified as a B Corp, but there’s always so much more to do and there’s new things that are emerging every day. So we want to make sure that we’re on top of that and doing right by our furry babies, but also by the planet as well.” – 42:28 – Aneisha Soobroyen